"I’m Norwegian but I moved to Egypt and then England when I was a kid."

I’m taking up my job as the Students’ Union Vice-President (International) and my main goal is to make sure everyone feels comfortable here at Essex, especially in the wake of Brexit. In the past different VP Internationals have done some incredible things with cultural events, but I’d like to use the role more politically, and make sure international students know their rights.

I’d like for the University to connect more with the wider Colchester area. The University is a really international place, so I don’t feel like a minority at Essex, but there can be that divide between “town and gown”, and they are very different environments. I used to work in town, though, which made it easier as I had local friends who showed me around, took me to the museum and things like that. I’d love to link more with the local international community, hold events alongside them and bridge the gap between students and residents. There’s no reason for us to be separate.

I didn’t really know what I wanted to do until this year, but now I know I want to go into migration studies and, help refugees and migrants. I’ve been an immigrant twice; I’m Norwegian but I moved to Egypt and then England when I was a kid. I speak four languages, which I think is a tool I can use to help people comfortably integrate and settle into their new country.

I was born in Norway, but my parents are Somali, and growing up I noticed that I looked different to everyone else, but it didn’t feel that strange or uncomfortable because I was born and raised there. But when I moved to other countries I definitely noticed that I was being treated differently. When I moved to England, they put me in bottom-set English; by the end of my first day, they moved me to the top set when they realised that I could actually speak fluently. There was definitely a transitional period which lasted maybe a year or two, so I can’t imagine what it feels like for students who step straight into university from another country. My advice would be to get involved as soon as possible; even before you get your results you can connect with your new course-mates and flatmates on Facebook.

My parents are my biggest inspiration. It must have been so hard to move from Somalia to Norway, learning a whole new language from scratch, getting degrees, raising five kids. My mum became a nurse, and my dad became the first black manager of a Norwegian IT company – it even ended up in the papers. They’ve done some incredible things in their lives, and if I could achieve half as much as them I’d be happy.

My motto throughout my whole degree is maybe a bit tongue in cheek but, honestly, Fed or Dead! I’m part of the Women’s Rugby Club and every Wednesday we go to the sports federation night in Sub Zero, our on-campus nightclub. It’s important to let off some steam once in a while – at Essex, we definitely work hard and play hard! 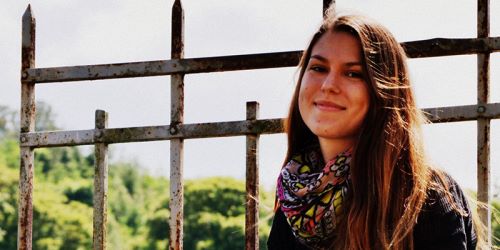 Ania's story
I want something that allows me to grow as a person and help other people.

Jawhen's story
My aspiration is to find out a little more about my roots.