The Essex LGBTQ+ Alliance is a network of Essex-based organisations sharing resources and best practice across the private, public and third sectors for the benefit of everyone in the workplace.

The aim of the Alliance is to promote equality and wellbeing, raise awareness of LGBTQ+ issues including issues around people with multiple identities and to share best practice with regard to sexual orientation and gender identity within the workplace.

As well as our University, there are 26 members of the Alliance including organisations such as the Ford Motor Company Ltd, the Essex Community Rehabilitation Company, Essex County Fire and Rescue Service, the Essex County Football Association, the Ministry of Defence Police and Essex Police.

Membership is free and open to any Essex-based organisation. We meet three times a year at venues throughout Essex. For more information and to request to join please email the Chair of the ELGBTA, Madelyn Wright at madelyn@essex.ac.uk

Some of the members of the Essex LGBTQ+ Alliance share their stories:

Now that we have that out of the way we can move on without further embarrassment. I’ve been “out of the closet” since a friend kindly told me I was gay more years ago than I care to count. Up till then it hadn’t really occurred to me that my self-perception of being different meant that I was gay. Didn’t everyone have a crush on their best mate at school? No? OK, maybe I need to reconsider a few things. All that was 30 years ago and I’ve kind of sorted out most of that stuff by now. Well, most of it.

These days I’m busy dealing with the “old” bit, which is like coming out all over again. I’ve decided the best approach is to hold on to the things which give me a sense of who I am, and to try to wear age appropriate clothing. The most valuable lesson I’ve learned in life as a gay man is; silence equals death. In practical terms that means I will not neutralise my identity for the benefit of others; I will not stay silent when awkward questions are asked; and I will definitely not pretend my sexuality isn’t an integral part of my life.

I feel I have been privileged to work for a University which respects its staff and upholds the values which it espouses. In return I feel I have an obligation to encourage the younger generation to express their identity and values openly and honestly, even if that causes moments of discomfort for others. It’s only discomfort, they’ll get over it. No-one died from discomfort. As for the age-appropriate clothing; I’m working on that. 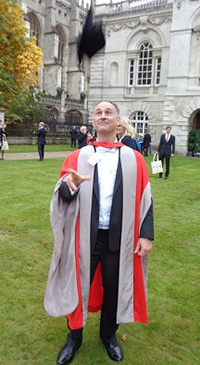 I am a committed supporter and advocate for EDI (equality, diversity and inclusion) in the workplace and society more generally. Being an out gay man, my particular focus is on LGBT+ issues and I am a member of the University’s LGBT+ Alliance. However, I am committed to all areas of EDI and in particular issues of gender equality in the workplace; I am Athena Swan SAT member for Essex Business School and a national Athena Swan panel reviewer for the Equality Challenge Unit [ECU].

I am extremely proud to work for Essex University, an employer that in my opinion leads the way in the higher education sector on EDI issues. Essex does so with genuine and honest commitment – it is most definitely not a box-ticking exercise. The principles of equality and fairness run through the veins of the University at all levels. The University of Essex is a really inclusive workplace where everyone is treated as an equal no matter what their role in the university, and irrespective of their gender, sexual orientation, race, religion, disability etc. I have experienced homophobia at more than one of my previous employers and found the experience of coming out very painful at those institutions. At Essex, I have never felt more valued by my colleagues across the university both for what I have achieved as an academic and, just as importantly to me, for who I am as person, including my sexuality. I cannot put into words how empowered this makes you feel as an individual, especially when, like I have, you have worked in environments where some colleagues are openly hostile to you simply because of your sexuality or, indeed, merely what they perceive your sexuality to be. Employees who feel comfortable to be themselves in the workplace will feel safe and free to develop to their full potential at work. Essex does this and so much more. 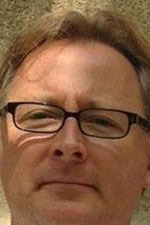 Richard came out at the age of 16, giving a gay rights speech during a school speech competition. At the time – 1985 – New Zealand was debating decriminalising homosexual sex. The following year he was elected chair of the student council and appointed deputy head-boy along with the captain of the First XV.

A confirmed Anglican, he credits his Christian faith, along with the support of his family and high school teachers, with giving him the strength to come out when he did. “It was a difficult time for us all with gay law reform going through parliament. A lot of hateful things were said by people of faith. I was blessed to belong to a supportive parish and church youth group.” He even contemplated entering the priesthood, before turning to his other loves, English, and Law, at Auckland University.

He has lived in the UK for 15 years now and believes it is important for those who feel comfortable with their sexuality to be open with their colleagues, and especially students. “I understand some people don’t want to come out and just want to get on with their jobs, but just as it’s important to have a mix of men and women, and people from different ethnic backgrounds, it is also important for people to see authority figures and colleagues with different sexualities too.”

He comments that, as liberal as things seem now, people, young, and older still struggle with being open about their sexualities and living their lives to their full potential. Further, “while we have marriage equality in almost all of the UK there’s still plenty of homophobia about. Teenagers are still thrown out of home for being other than straight, there’s still violence against people on sexuality grounds, people still get bullied. And then outside of the UK there are countries’ where being gay is still a crime, even punishable by death.”

As part of the Essex LGBT Alliance, Richard believes that it is tremendously empowering to see organisations, and their leadership, being serious about inclusivity. “Essex’s stance on these issues is one of the reasons it’s a great place to work or study, whatever your identity.”

I’m the Graduation Manager and I’ve been at the University for 16 years. Essex is an incredibly inclusive workplace and I’m proud to work for an employer which embraces equality and diversity in an authentic manner. I’ve been very lucky in that my very first manager knew I was gay from the beginning and therefore would not tolerate prejudice (not that there was ever any).

I neither hide nor flaunt my sexuality but I’ve never had to “come out” at Essex in the way I had to in previous employment, and that says a lot about the positive atmosphere at the University. I’m captain of the staff netball team and we play in a local league – it is really noticeable that the assumption that my partner is a man is made more often by other netballers in the league than it is by colleagues or students at Essex.

You can never take equality for granted, however, and ironically it is the diversity of the staff and student body at the University which acts as a reminder of that, when you meet students or colleagues from other countries where homosexuality is not only unacceptable, it can lead to assault and sometimes death.

I’ve been lucky in never having experienced prejudice about my sexuality (I’ve actually had more prejudice for being a woman) but it still exists – especially in social media where bullies hide too easily behind the keyboard – and I am proud to be part of an institution which will always fight prejudice and which encourages me to be a role model to other LGBT colleagues and students who may not have had the support which I have had.