Our ‘resident’ Chaplains are:

We have a number of Chaplains and faith representatives who offer their time to the Chaplaincy: 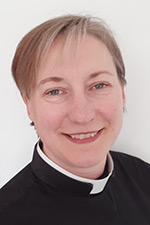 It is my privilege to be a source of support and listening to the Colchester campus community as we work together. You don't have to believe in God to chat with a chaplain - I provide confidential, non-judgemental and inclusive support.

Please do contact me if you have questions on faith, hope, fear, belonging, loss, love, joy or pain – or we could just drink tea and wonder together about the beauty and strangeness of life.

Sara is also associate priest in the parishes of Wivenhoe, Greenstead and Colchester New Town, and the Hythe. 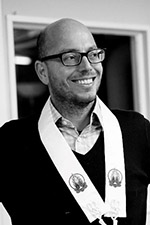 I am chairman of the Colchester Buddhist Centre and your local Buddhist Faith Representative.

Please feel free to contact me on any Buddhist matters. I am based at the Colchester Buddhist Centre in Colchester city centre. Visitors are always welcome.

We run beginners classes every Wednesday evening at 7.00pm – 9.30pm, meditation is on Friday 1pm – 2pm and we will be starting a new Saturday morning class at 11am – 1pm. All classes are by donation.

The Catholic Chaplaincy is here to provide spiritual and pastoral care to Catholic staff and students. This includes Mass in The Faith Centre Space 1 each Sunday at 12pm. We have Mass on some weekdays and the sacrament of Confession is available.

We organise trips and social events (often in association with the Catholic Society). We are very happy to help people who would like to learn more about the Catholic faith or to explore the meaning of life. All our events are open to everyone. 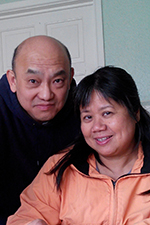 We are a missionary couple working under COCM (Chinese Overseas Christian Mission) and are based in Colchester serving as pastors of the Colchester Chinese Christian Church. We are also here in this University as Faith advisors/Chaplains supporting the Chinese Christian Fellowship as well as all the Chinese students who need our help and advice especially on faith-related matters.

We came to the UK from Hong Kong with our two daughters in 2014 to serve as pastors of a Chinese church in Cambridge. We served there for 6.5 years and then decided to start a new chapter by joining COCM and moved to Colchester. During our years in Cambridge, we also served as associate chaplains of the Anglia Ruskin University, mainly supporting Chinese students.

If you are a Chinese student or someone who would love to talk to a Chinese pastor (in Mandarin, Cantonese or English), you are very welcome to contact us by emailing stanleyyatkwong@gmail.com or helenhungtwong@gmail.com, or via telephone - 07858 029381 (Stanley) and 07907 366592 (Helen).

For more information about us and our ministries, please check the following websites -

May God bless you and your study!

We exist to help international students befriend one another and get to know some British residents well. We offer some events which are purely social and some which allow students of all faiths or none to investigate and discuss Christian teaching. All our events are clearly advertised so that students can choose what they would like to attend.

Friends International is really happy to meet students from any country and any or no faith background. We also provide one social activity particularly for students' female family members where they can socialise together and practise their English.

Father Alexander Haig and Father Deacon Mark Shillaker care for the Orthodox staff and students of the University.

Rabbi Elazar is part of the University Jewish Chaplaincy which ensures that Jewish students have access to a chaplain.

The Methodist Chaplains contribute to the life of the University, supporting the Faith Centre and assisting in its work and provision for all students. Events led by a chaplain will be advertised on the Faith Centre noticeboard and website.

Students are welcome to contact the Methodist Chaplains by email. Chris is the Superintendent Minister of the Colchester Methodist Circuit with overall responsibility for Methodist Chaplaincy at Essex. Though retired from active circuit ministry, John is available to meet students on campus and Phil is a lay Preacher who acts as liaison for Friends International students.

The Methodist Church cherishes its place in the Body of Christ. It is Britain's fourth largest Christian denomination and loyally accepts the fundamental principles of the historic creeds and of the Protestant Reformation. There are approximately 170,000 people in Britain who have made a commitment to Christian discipleship and are active members of a local Methodist church. The British Methodist church is part of a worldwide Methodist family of over 60 million committed members and a further 20 million adherents.

Students are invited to attend any of our local Methodist Churches. There are several in the Colchester area and also on the Tendring peninsular. Chris is the minister at The Ark Methodist Church in Highwoods and at the Colchester town centre church, known as Castle Methodist Church, just off the high street, opposite the toy shop (and, predictably, next to the Castle). Rev Joe Adams is the minister of the nearest Methodist church to the campus in Wivenhoe and is also minister at Wimpole Road Church, not far from the Hythe. John was a previous minister at Wimpole Road, but now attends Great Bentley Church (on the way to Clacton). Full details of local Methodist churches can be found on the Colchester and on the Tendring circuit websites (see below).

Quakers are a faith group committed to working for equality and peace. Our meetings offer everyone a chance to explore spirituality in a caring community. We try to live in truth, peace, simplicity and equality, finding God in ourselves and those around us. We don't offer neat creeds or doctrine. Instead, we try to help each other work out how we should live. All people are welcome and accepted at a Quaker meeting.

The Quaker Faith Representative at the University of Essex is Dr Elizabeth Bennett. Lizzie would be more than happy to hear from you if you would like someone to talk to or to make contact with others interested in Quaker beliefs, values or way of life. Email: elizabeth.bennett@essex.ac.uk

Meetings take place in a gathered silence. In the stillness we open our hearts and lives to new insights and guidance. Sometimes we are moved to share what we discover with those present. We call this 'ministry'. We listen to what everyone has to say to find its meaning for us. Anyone can give ministry, including visitors.

I am a member of Soka Gakkai – UK (SGI-UK), a lay Buddhist organisation based on the teachings of the Japanese Buddhist teacher Nichiren and the Lotus Sutra. Nichiren Buddhism is a humanistic philosophy and practice based on treasuring the inherent dignity and value of the most precious treasure in the universe – life itself. Our international movement of Buddhist humanism is committed to equality and peace, empowering individuals through Buddhist practice to develop their innate wisdom, courage and compassion, and to take action for their own happiness and that of others.

We hold regular discussion meetings where practitioners and anyone who is interested can learn more about how to practice Nichiren Buddhism, ask questions, share experiences and find out more about Buddhist activities for peace. As faith representative I am happy to answer any questions you may have and to support you to explore Buddhist practice in a welcoming and active community.

Contact Andy for details of local meetings about Nichiren Buddhism.