Outstanding individuals to be honoured at Graduation 2022 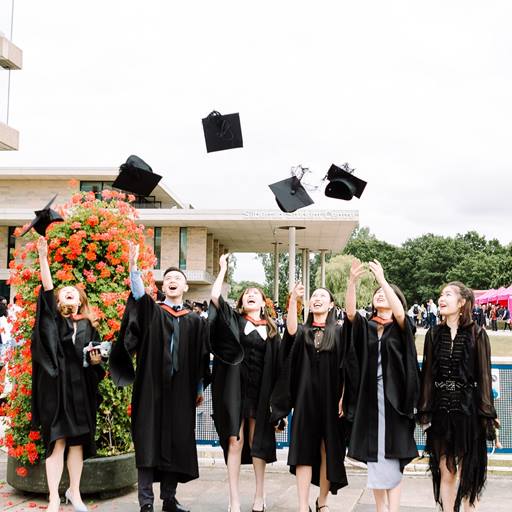 Honorary degrees will be presented by the University of Essex to outstanding figures in the arts, sport, technology, science and business sectors as it holds its summer graduation ceremonies for the first time since 2019.

Among those being recognised in the ceremonies in July are leading mental health and human rights lawyer Lucy Scott-Moncrieff CBE, campaigning environmental journalist Charles Clover and former Times Higher Education editor Judith Judd, who served as Chair of Council at the University.

Lucy said: "I have huge admiration for the work done at Essex on access to justice and the rule of law, and am very chuffed indeed to be awarded an honorary degree, which allows me to be associated with these vital activities and people for whom I have the highest regard."

Essex alumni making a global impact are also being honoured including Head of EMEA and CEO of Morgan Stanley & Co. International Plc Clare Woodman CBE – one of the most senior women in international banking in the UK.

Clare said: “I am deeply grateful and feel very privileged to be receiving this honorary degree from my alma mater. I have so many fond memories from my time as an undergraduate at this great institution, and am humbled to be a recipient of such a distinguished accolade.”

Nigel said: “To say I'm honoured by the University's decision is an understatement. I'm very much looking forward to returning to the Colchester Campus for the summer graduation ceremony.”

David said: "I have always said that I fell into acting as though in a dream. I found myself at the challenging and inspiring East 15 Acting School to start my training as an actor. And left in 1973. And after forty nine years as a professional actor, I know that that life long training continues job by job in order to be the actor I want to be. I still feel like I am in a dream, more so because I know that people actually pay me to do what I do! I have had a wonderful career with many highs and very few lows. But I can honestly say that I was emotional and lost for words to receive the letter from Professor Anthony Forster, the Vice-Chancellor of the University, asking me to accept an Honorary Doctorate. I am humbled to have such a prestigious University take stock of my life and career and feel me worthy of such an honour."

Anne said: "I am incredibly touched and honoured to receive this honorary degree. Essex has been my home for a number of years now and I have such warmth for the area so to receive it from the University of Essex is even more special. I am humbled to have received this and congratulations to all the other inspirational people who have received honorary degrees too. I look forward to the ceremony."

Graduation 2022 will see entrepreneur Chantelle Bell named Alumna of the Year, Chantelle is co-founder of Syrona Health, which is working to improve management of chronic gynaecological health conditions.

The distinguished Honorary Graduands will join thousands of Essex students plus their guests for the highlight of the University’s calendar. This year, Graduation ceremonies will stretch across two weeks for the first time, starting from Monday 18 July.

Vice-Chancellor Professor Anthony Forster said: “We are delighted to be recognising the contribution of these incredible individuals who are a real inspiration to our community.

“Many receiving honorary degrees are Essex alumni who have gone on to make a significant difference across the globe and represent the Essex spirit in action. We are also honouring other inspirational figures in their chosen fields and we are thrilled to welcome them to our Essex family as honorary graduates.”

Since 1967, the University has honoured more than 300 people from many walks of life for their varied contributions to learning, creativity and knowledge, to human welfare and human rights, and to the building and maintaining of a fairer society.

More about our honorary graduates

Charles Clover - Co-Founder of Blue Marine Foundation, the influential marine conservation charity. Charles made his name as an author and environmental journalist writing principally for the Sunday Times and the Daily Telegraph for which he was Environment Editor for twenty-two years. His book The End of the Line (Ebury, 2004) and the award-winning major documentary film that it inspired (presented by Charles) highlighted overfishing as a global problem.

Jane Gurney – Award-winning chief executive of the Essex & Herts Air Ambulance Trust. She has led the charity since 2003 and is a passionate advocate for the charity sector. She has won a number of awards in recognition of her leadership and commitment.

Judith Judd - An education journalist for nearly 30 years, Judith worked for the Observer, the Independent on Sunday, the Independent and was then editor of the Times Educational Supplement. She was a member of the Council of the University of Essex for nine years and was a pro chancellor before becoming Chair of Council in 2018.

Professor Paul Hardaker - CEO of the Institute of Physics until June 2022, former CEO of the Royal Meteorological Society and a former Trustee of the Science Council. Professor Hardaker studied for his BSc in Mathematics and Computing, and his PhD in Mathematics at the University of Essex.

Philip Long OBE - Chief Executive of the National Trust for Scotland, taking up the role in July 2020. Prior to that he was founding Director of V&A Dundee, responsible for the development and operation of this new international design museum. Philip completed a Masters in Gallery Studies at the University of Essex.

Nigel Roberts FBCS – An influential computer scientist, Nigel was one of the group of students at the University of Essex who conceived and developed the world's first multi-user computer game (MUD). He served as a Director on the Internet Corporation for Assigned Names and Numbers (ICANN) Board between October 2018 and October 2021. ICANN is a not-for-profit public-benefit corporation working across the world to keep the Internet secure, stable and interoperable.

Anne Wafula Strike MBE - Athlete, sporting ambassador, author and disability rights and inclusion campaigner. In 2020, Anne was appointed as a Commonwealth special envoy Champion for Equality in Sports with a role to promote the Commonwealth’s values and principles around the world by connecting sporting initiatives and supporting the implementation of Sustainable Development Goals relating to sport, peace and development and improving equality in sport. She continues to advocate for an accessible and inclusive society.

Clare Woodman CBE - Head of EMEA and CEO of Morgan Stanley & Co. International Plc, Clare is a member of Morgan Stanley’s global operating and management committees and also chair of Morgan Stanley Europe SE. Clare was previously Global Chief Operating Officer for Morgan Stanley’s Institutional Securities Group. Clare is a Trustee of the Morgan Stanley International Foundation, overseeing the firm’s longstanding partnership with Great Ormond Street Hospital. She is also an active sponsor of the firm’s Women's Business Alliance. Clare holds a number of senior positions across industry organisations: she is a member of the UK Investment Council, FCA Markets Practitioner Panel and Chair of the U.S.-UK Business Council. She is a Trustee of the FT Financial Literacy and Inclusion Campaign. Clare studied at the London Business School where she obtained her MBA and in 2020 was awarded a CBE for Services to Finance. She completed a BA in Government at the University of Essex.

David Yip - Actor, writer and director, David has worked across television, film and theatre. He is probably the best known and most successful Chinese heritage actor in the UK. He starred in the influential and highly popular BBC television series The Chinese Detective, has featured in numerous Hollywood blockbusters and played leading roles in theatre productions across the world. He graduated from East 15 Acting School in 1973.