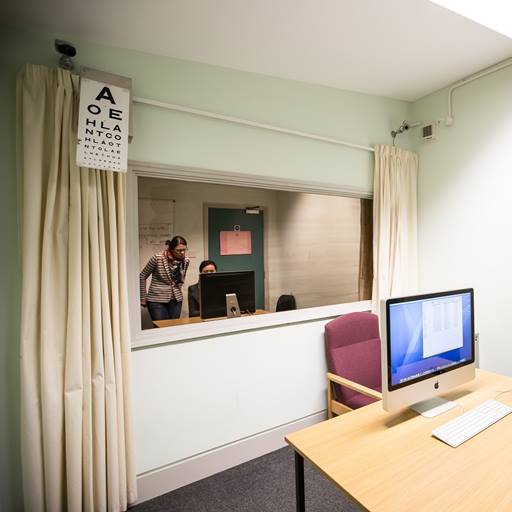 Our dedicated Centre for Brain Science houses many of the labs used for for a wide range of psychological studies.

Our Centre for Brain Science (CBS) opened in 2009 and is purpose-built to house state-of-the-art equipment that allows staff to directly measure and modulate brain activity, as well as a range of equipment to measure eye movements and various indices of physiological response.

The CBS won a Sustainable Developments award in the 2008 Colchester 2020 and RIBA Architectural Awards. It is one of the most environmentally sustainable buildings at our Colchester Campus.

Neuromodulation, in the form of transcranial magnetic stimulation (TMS) and transcranial direct/alternating current stimulation (tD/ACS) is a means of non-invasively but directly stimulating the brain. TMS has many guises. For example, single pulses can be used to briefly and transiently disrupt information processing in the underlying cortex or to measure the excitability of the corticospinal tract. Paired-pulses can be used to examine inhibitory and excitatory circuits in the brain. Repetitive pulses (rTMS) and tD/ACS can be used to alter the excitability of the cortex and have many possible clinical applications (eg in the treatment of depression, tinnitus, auditory hallucinations, epilepsy and many others).

In the CBS, TMS is currently used in the following areas:

The CBS is equipped with two of the latest Magstim Transcranial Magnetic Stimulation (TMS) systems – the 2002/Bistim2 and the Rapid2. This provides the capability for running a variety of TMS protocols including: single pulse, paired-pulse, repetitive trains (rTMS) and dual coil approaches (e.g. transcallosal inhibition).

We also have the Brainsight2, a stereotactic image guidance system that facilitates the positioning of transcranial magnetic stimulator coils over a subject's brain. Electrical stimulation of the brain is also possible using the latest Magstim Eldith Transcranial Direct Current Stimulator Plus. With this device, transcranial direct current stimulation (tDCS) is possible in either continuous or pulsed modes.

The combination of neuromodulation with our other psychophysiological tools (eg EEG, NIRS) opens an exciting new avenue for research in cognitive neuroscience.

EEG is a completely non-invasive method of recording cortical activity or "brain-waves".

Here at the CBS, EEG research is carried out in a number of areas. We examine experimentally driven changes in the EEG to gain insight into cortical mechanisms associated with areas of interest that include:

Also, at a fundamental level, we are constantly seeking to explore the functional significance of the EEG ("what do these brain-waves actually mean?").

The CBS is equipped with three state-of-the-art EEG systems:

Some of our systems are compatible with TMS.

NIRS is a method of recording changes in blood oxygen levels. In terms of the brain, it has been dubbed DIY-fMRI, in that like fMRI, it also measures changes in oxygenated and de-oxygenated haemoglobin (although by very different means).

To explain briefly, when an area of the brain is active, it uses oxygen to fuel this activity. This is immediately followed by an increase in blood flow to that area, carrying fresh oxygen in the form of oxygenated haemoglobin. NIRS works by shining near infrared light into tissue and measuring the amount that is reflected back. Changes in the concentration of oxygenated and de-oxygenated haemoglobin affect this reflection. NIRS records these changes and in so doing provides an indirect measure of cortical activity.

The department has two 24-channels Artinis OxyMon III near infrared systems capable of being configured into one 48-channels system when required. In addition to this we use a 8x8 channel NIRScout in the BabyLab, and a 8x8 NIRSport 2 mobile system for research off-site.

The CBS has two virtual reality suites equipped with a Virtualis VR system. It integrates InterSense head, hand and eye-tracking capabilities with an NVIS MX90 head mounted display with a 1280 x 1024 resolution and 90 degree FOV. 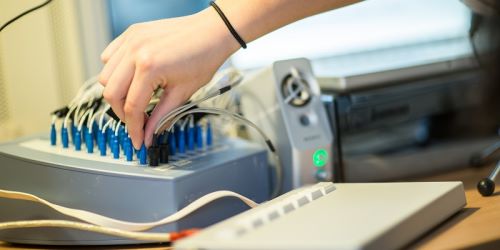 Facilities in the Department of Psychology
Our research units and facilities include the Babylab, the Centre for Brain Science, and a unit looking at the psychology behind health behaviour and wellbeing. 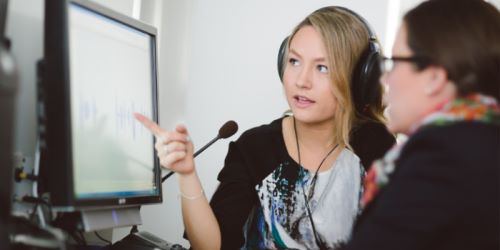 Our psychology research
Our research explores three key themes: thinking about the world; interacting with the world; and experiencing the world. 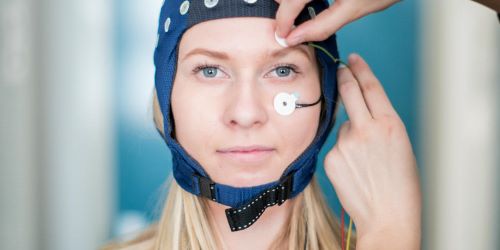 Subject area: Psychology
Find out more about psychology at Essex and our range of undergraduate degrees.