“I live in the parkland and Mrs Rebow says I am very unsociable.”

John Constable’s painting of Wivenhoe Park offers a unique insight into the country estate of the Rebow family. A close friend of Constable’s father, Major Francis Rebow invited Constable to stay at Wivenhoe House and paint his home in August 1816. Under a blustery sky, peace and order pervade the landscape. Clouds provide areas of sunshine and cool shade, beneath which Wivenhoe House sits, bathed in light. In the surrounding parkland, cows graze, swans glide and fishermen bring in their nets, while to the left the daughter of the house, Mary Rebow, goes out for a ride in her donkey cart. Depicted with great clarity and precision, we too are offered a visual journey through the parkland. 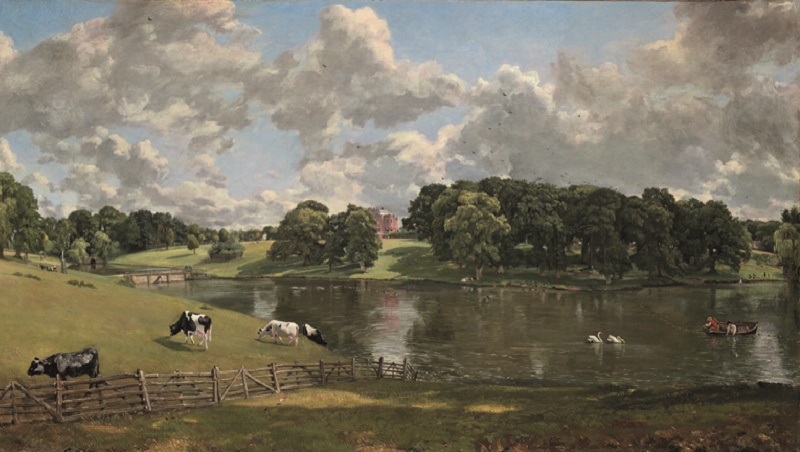 Typically, the owner of a country estate might have wished for a grandiose portrait of their estate – with the focus of the painting being on their house, with perhaps the presence of deer in the foreground to denote their wealth and status. By contrast, in Wivenhoe Park we see that the Rebow family were content to allow Constable to plant his easel far enough away from the house to indulge his love of nature, while at the same time, revealing their land as a self-sustaining, working estate. Thus we see cows soon to be milked, workers fishing, while all around the parkland there are indicators of good husbandry of the land, such as the trees that have been protected from grazing cattle and deer. The Rebow family did, however, make other demands such as requesting that Constable add their deer house to the painting. Accommodating such wishes forced Constable to attach panels to each side of the painting’s canvas: on the right for the inclusion of the deer house, while the left panel was included to rebalance the painting. Now offering a panoramic view, the central, elevated house, acts as a hub, with all activity radiating out from it. Under a large restless sky – the “chiaroscuro of nature” as Constable called it – all is in movement as passing clouds break up the land into shifting patterns of light, while the new extended panels allow additional activity at the periphery: the fishermen in their boat and the little girl in her donkey cart. Interestingly, Mary Rebow, described by Constable as the “heroine” of the painting, can only just be identified. Prior knowledge of who she is essential to interpret the tiny, precise brushstrokes as the Rebows’ daughter. Similarly with the deer house – a single smudge of brown is all that is given to denote it. It is with great skill that Constable brings together the Rebows’ intimate knowledge of everyday life on their estate and his love of landscape to create a harmonious interpretation of the parkland.

Sketches made of Wivenhoe Park reveal some of the alterations Constable made to the parkland to suit his interpretation of nature. The house has been moved back up the hill (it certainly would not be reflected in the lake in its present position) while a tree in the field of cows to the left has been removed, opening up the scene and allowing us to see the route Mary takes in her donkey cart. If you visit Wivenhoe Park today (the home of the University of Essex since 1964) you can attempt to get the house in the right place, but then its reflection disappears, yet if get the reflection correct, the house is now too close. It is only through physically standing in the parkland that we become aware of the composite nature of the painting, whereby Constable has carefully constructed his own view of nature.

Wivenhoe Park was important to John Constable at a personal level, as the commission helped pay for his wedding to Maria Bicknell a few months later in October 1816. It was also his last painting before moving to London. Indeed, one of the unique aspects of Wivenhoe Park is that Constable painted it on his easel in situ rather than developing it back at the studio, as with his later works that were produced in London over the winter months, working from pencil and oil sketches made during summer visits to Essex. Today you can still walk around the grounds of Wivenhoe Park in the footsteps of Constable, reflecting on the interpretations he made to create this harmonious painting of a country estate. We do so under the same sky full of bilious clouds, and over 200 years later, the essence of this Essex parkland remains remarkably the same.