Vaccine platforms and limited global production capacity: What is to be done? “No one is safe till everyone is safe” was the rallying call of the WHO and EU in April 2020, when the role of international cooperation in the rapid diagnosis and development of vaccines was seen as vital to the fight against the pandemic. Yet today, 47 of the 79 low and lower-middle income countries have yet to vaccinate anyone.

Recently, poor countries have won the backing of the US for IP waiver on the new vaccines at the WTO, although it does not cover Covid treatment drugs and equipment as originally requested in the TRIPS waiver. Will the waiver help and what might constitute a way forward? In this blog, I will highlight the role of limited global production capacity for the new biological vaccines and argue that reform of compulsory licensing under TRIPS, the key international agreement that covers IP, offers the best way forward to boost vaccine production.

Traditionally, vaccines are virus-based or protein-based, and the majority of vaccines in use (such as for polio and small pox) are based on inactivated or attenuated viruses. As this technology is well understood, there is widespread production capacity for such traditional vaccine platforms (both the Chinese Sinopharm and Indian Covaxin vaccines are of this type).

In the context of COVID, however, they have shown lower efficacy when compared to the newer biologic vaccines. Even so, limitations that prevent large scale manufacturing include: the need to grow the virus in large quantities and bio-safe conditions; the need for extensive safety testing, and the establishment of production capacity in several recombinant proteins that may need to be produced simultaneously.

First, their manufacture on a large scale requires a different supply chain of ingredients compared to traditional vaccine approaches—it is estimated that 280 ingredients make up the BioNtech-Pfizer vaccine. Even where capacity has been established, manufacturers are struggling to maintain the stability of the crucial antigens whilst producing at large scale. Second, there is little pre-existing data on the safety and efficacy of the novel vaccines in humans and this information is just emerging from clinical trials data and as millions are vaccinated. In many cases, these clinical trial data are held as trade secrets and not fully disclosed. 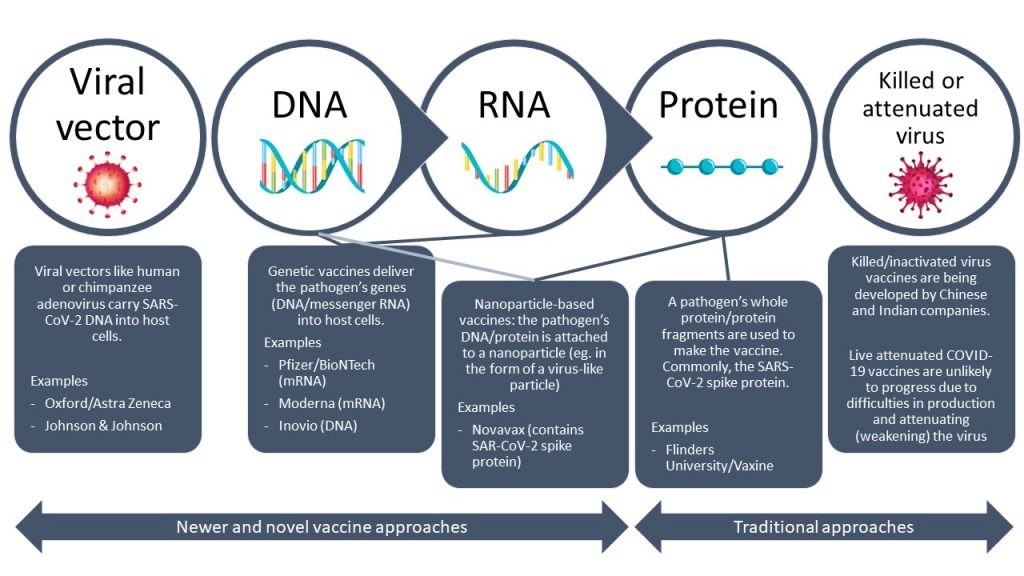 Difficulties with the large scale manufacture of new vaccines and the crisis in India have resulted in slower than expected supply and the resulting scarcity has created a sense of panic across the world, as vaccines are widely regarded as the way out of the current (economic) lockdowns. Richer countries have responded by cornering all the existing vaccine supply.

In the UK and US, vaccines were successfully rolled out because procurement contracts included nationally based components of the supply chain. The European Union nations and Japan have locked down hundreds of millions of doses of vaccines for themselves, but have been slower in planning for locally sourced supply they can control.

Viewed thus, the way out of this conundrum is surely to allow the parallel expansion of production capacity in other parts of the world. Yet the focus of the developing world has been on obtaining patent waivers, drawing on a parallel between the HIV-aids retroviral medicines and the newly developed COVID vaccines.

A large part of the case against the IP waiver proposal at the WTO is that it does not help overcome the crucial supply bottlenecks that are hampering vaccine delivery of the new biologic vaccines. Even if a broader IP waiver is agreed upon, which includes patents covering raw materials, consumables and equipment, patents can provide only partial disclosure of the underlying technology.

Much valuable production related information from clinical trials, manufacturing processes and the optimisation of equipment, and the secret recipes which are essential for vaccine production, are all held as trade secrets, in a bid to make reverse engineering based on disclosure from patents difficult.

This has been clearly acknowledged by Moderna. Although Article 66.2 of TRIPS does require developed country members to provide incentives to enterprises in their territories for the purpose of promoting and encouraging technology transfer to developing countries to enable them to create a “sound and viable technological base”, these provisions have not been prominent points of discussion in current debates. IP waivers will achieve little in the absence of an enforceable commitment to transfer technology.

The need to set up additional production capacity relatively quickly suggests that compulsory licensing of patents is the better short-run solution. Licensing obliges the firm to share know-how in return for the license payment. Such provision may be easier in the case of inactivated virus vaccines where the underlying technology is well understood. In the case of the new biologics, firms are naturally uneasy about giving up new vaccine platforms that many see as setting the course for medicines for cancer and other immune system-related illnesses.

Health activists argue that the large role of public funding in the R&D and development of the new mRNA vaccines, and government/university ownership of the crucial patents, give Western governments the leverage to force vaccine manufacturers to share their know-how and enable global production. For all varieties of vaccine, current rules governing compulsory IP licensing are very restrictive, as they only favour countries that already have productive capacity, and this might pose specific problems for Africa.

Another way forward may be to allow the licensing of a bundle of necessary patents and trade secrets at a fair price (as happens sometimes in the software and semi-conductor sectors). The underlying bundle would be different for different vaccines.

The WHO has worked to share data on the pandemic, but it does not currently have the power to demand pooling of patents or disclosure of clinical trial and other trade secrets held by vaccine producers, where WTO appears to have jurisdiction. Tellingly, the patent pool established by WHO for COVID vaccines (C-TAP) has yet to receive a single contribution from industry, despite the proven success of patent pooling in treating HIV, hepatitis C and tuberculosis.

Enabling a rigorous approach to the health risks posed by the new vaccines is also an emerging area of concern. National governments have shown different preferences for applying the precautionary principle (e.g., EU) and balance of risks approach (UK) in the vaccine approval process. Having different health authorities with conflicting assessments (as in the case of Astra Zeneca) and accusations of bias by the Russians has harmed the cause of global vaccination. The WHO has the capacity to work with national health bodies to establish when particular vaccines should be preferred and what trade-offs are entailed.

The end of the pandemic depends both upon the spread of vaccination everywhere and the survival of non-pathogenic mutations of the virus. Uneven vaccination may allow the virus to hide in some places and develop variants that render existing vaccines ineffective—as happened with polio. More needs to be done to coordinate the individual spheres of activity of the WHO and WTO to ensure that global public health is the ultimate priority. Till then, nobody can be safe because everybody is not safe.

This blog originally appeared on the IPKat blog spot on 13 May 2021.

THE IPKAT LICENSES THE USE OF ITS BLOG POSTS UNDER A CREATIVE COMMONS ATTRIBUTION-NON COMMERCIAL LICENCE.